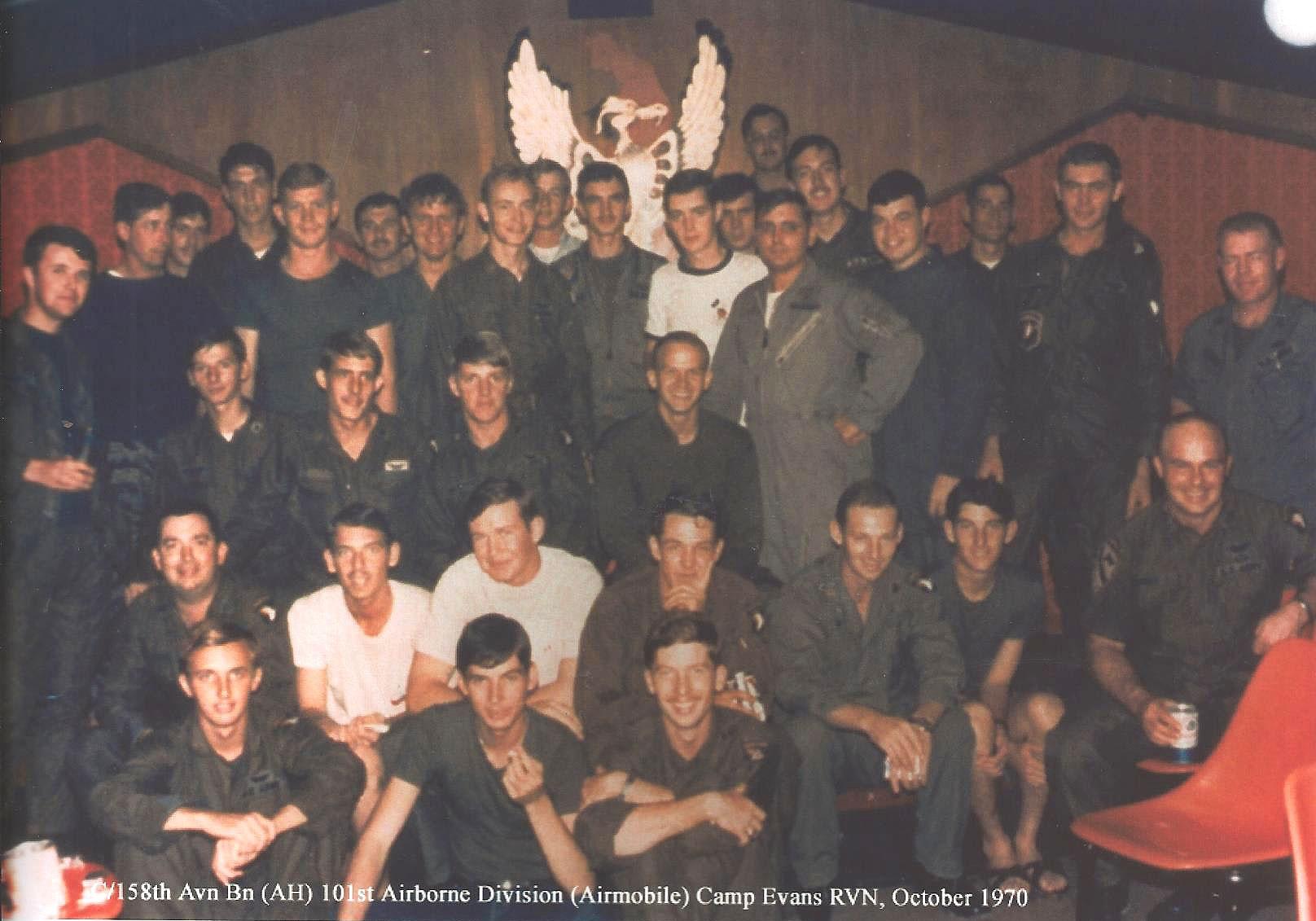 I was born in 1948, drafted January 1968, went into Army 4/24/68. Went to Basic, AIT, the on to Ft. Benning for Infantry OCS. Upon graduation was selected to go Rotary Wing Flight School at Ft Wolters and Ft Rucker. Arrived in Vietnam 7/1/70. Assigned to 101st Airborne Division in I Corps. First 6 months with C/158th Aviation Battalion at Camp Evan- our callsign The PHOENIX. In my 1st full week flying with Unit, participated in the evacuation of Fire Base Ripcord on  7/23/70, my first experience of carrying dead and wounded soldiers in my aircraft. The dead had been rotting in the jungle for 2 days, no body bag for 1. It was horrendous, I and pilots involved received the Distinguished Flying Cross. Our normal operations included combat assaults, resupply, C&C, Nighthawk, and Flare missions. We also flew SOG teams for CCN into Laos on numerous occasions. I was shot at uncountable number of times. Lucky to only have 1 occasion of taking hits in aircraft body. I was never shot down. We took mortars and rockets several times a week at our base camp. My Mentor, hoochmate, and friend, LT. Finn crashed in the DMZ 9/20/70 and was KIA along with 10 others. David Slone of the Rangers survived & I made contact with him 9/20/16. My daughter Tina was born 11/5/70 while i was in Vietnam. Saw her for 1st time on R&R in Hawaii Feb. 1971. A total of 16 friends were KIA from my Unit, the Phoenix while I was in Vietnam. 3 Friends from Flight school and numerous friends from OCS were killed in Vietnam. 1/1/71 I went to HHC, 1st Brigade at Camp Eagle and served the rest of my tour flying C&C. I flew 880 hours of Combat, 732 Combat missions, and received the DFC, Bronze Start, and Air Medal with 25 Oak Leaf Clusters. Discharged from Army 7/11/72. Went to college, remarried, and spent 30 + years without fully dealing with my PTSD. I am sill in a PTSD and Alcohol recovery. The sights, smells, and memories haunt me. I have nightmares regularly. I now work for the VA & have for 5 years. I have satisfaction knowing I am helping other Veterans and love my job. My wife Chris & I have been married 41 years and have a 27 year old son Nicholas. I have lost many friends and seen the scourge of Agent Orange on their bodies and lives. I detest War and all the suffering it causes soldiers and families. Pray for Peace. Gene