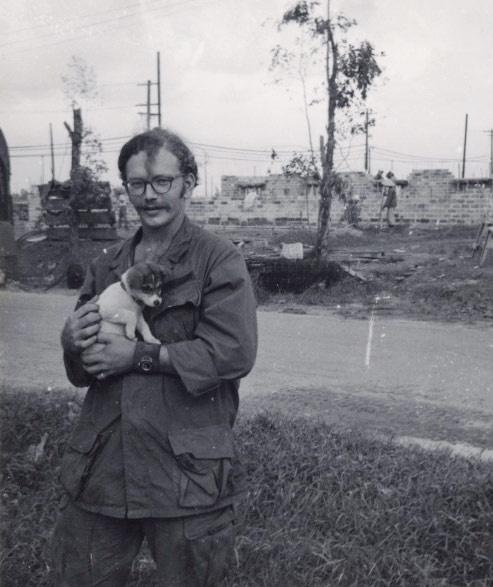 One of my dad’s art students was sent to Vietnam. That was 1965 or 66. Mike was a young, handsome, talented young man. He didn’t come home. In 1969, I went away to college and experienced protests and sit ins against the war. The war had been on TV for the last 5 years. I didn’t understand what we were fighting for or against. But I knew I hated this war!

In 1969-70 they started a draft according to birthdays. My boyfriend, Bernie, had a low number of 191 and was volunteered to go to war. He didn’t want to go, I didn’t want him to go and we talked about Canada. After boot camp, we married so we could be together before he had to go overseas.

The reality was Bernie had a Krypto clearance, whatever that was, and he was to study the Vietnamese language so as to work as an interpreter. Bernie was stationed at the Army Base in El Paso, Texas. We lived there for nine months.

That’s where we met one of the lucky Vietnamese. I don’t remember how she got out of her country but I knew she was lucky to be here in the USA teaching the Vietnamese language to the military. I resented that she was here, safe and sound while my husband and others would be going to her country to fight in a  war for what, to save the world from communism.

Before coming home from Texas in 1971 we had a party in which the Vietnamese teacher was invited. She gave me a beautiful little china boat decorated with flowers. The gift did not curb my resentment of the Vietnamese nor did it have much meaning for me at all. I still have it on my shelf.

In July 1971 I found out I was pregnant, the same month Bernie left for a place called Phu Bai, Vietnam. How could he not be here when our child was coming into the world? I guess in the beginning of our involvement in the war, one could get deferments. But by 1971, more troops were needed and the government
wasn’t giving deferments, at least not to common folk for the reason of pregnancy. I wrote to President Nixon about this. The President answered me in a general form letter. I can’t remember what it said but nothing would change the fact that Bernie was in Vietnam, away from his family. I think I lost my patriotism that summer. But  perhaps I really lost it back in 1965  when Mike was killed or when I watched the flag draped caskets came home on TV.

The government was sending a fragile young man to war. Bernie hadn't worked through his father’s suicide from four years before. Now he would suffer more mental anguish. I didn’t know how he would cope. I lived at home with my parents and found a job as a teacher’s aid. In the beginning Bernie and I wrote letters to each other every day. We missed each other so much. As our time apart lengthened, the letters from him decreased. The few letters I got late in his tour weren’t about missing me, they were about the hooch mama, the guys, the booze and the pot.

Our daughter was born in February 1972. Bernie got to come home on leave to see her but had to go back after a week. I could already detect a difference in Bernie, the difference being a kind of reserved and careless attitude about himself, his family and life.

Bernie came home for good that summer. He was angry and unsettled and drank too much. We bought a little house, we worked and we both went back to school. He tried to make his life work. He was highly intelligent and could have been whatever he wanted to be.

I became a nurse. Bernie worked as a chemist. The drinking got worse, the anger got worse. I wanted him to be a husband and a father. He wanted to be what he wanted to be left alone. The ghosts of the past haunted Bernie and he couldn’t deal. I wanted him to get help. I wanted to help him, to save him but he didn’t want to save himself and he continued a downward spiral for 35 years. He went through the motions of living but could never quite connect with life. I resented that he wasn’t there for me or our daughter and our life together became impossible. He eventually pushed me away, he pushed everyone away. The alcohol and maybe agent orange did its damage to the body, the mind and to the family.

As for myself, in the beginning of my career, I worked as a nurse on a pediatric unit. The Vietnam refugees that were in our care sparked anger and resentment in me again. The other nurses and I took care of them but who helped take care of my child. Not her father and not the government.

My resentment towards the Vietnamese people is gone. I know now they were just trying to survive the consequences of an unwanted war.  My patriotism is back but always I’m on guard when the heads of government want to go to war.

I never knew what Bernie did in Vietnam but, I know in the delirium of DT’s he was crouched down in front of the window with his imaginary machine gun, afraid of them. Whatever happened, he never talked about it. He died at age 59, alone in a nursing home. I left him, his family left him, and his daughter never knew him. But perhaps, really he left us. A casualty of war.

The war left so many physical and emotional scars for the soldier I knew and his family and of course for all of the returning Vets.

Bernie wasn’t physically killed in Vietnam but for 35 years it was like he was dead. And like the military dead, his family didn’t have him.

He’s buried at Jefferson Barracks Cemetery in Missouri. I hear when a soldier has no one at the gravesite before burial, the military is there.