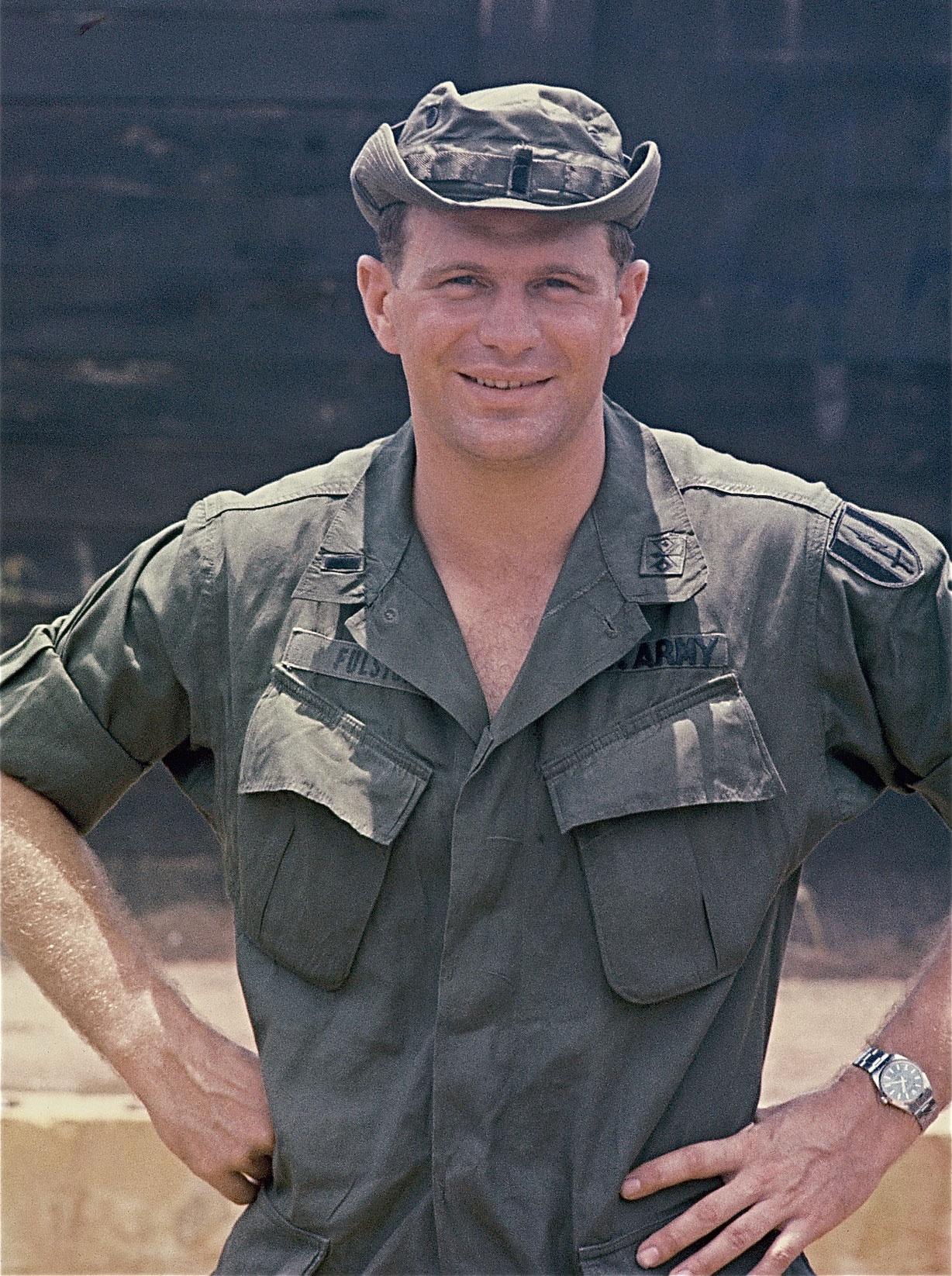 My Dad was in the Army and worked at Curtis Wright during  World War  II.

I grew up in South St Louis and my Dad died when I was 16! This changed my life big time. I had a great teacher at Southwest High who got me a small track scholarship to Wayne State Teachers College in Nebraska. After two years I transferred to University of Missouri in Columbia as my high school sweetheart was attending there.  So I had 2 years to complete my Bachelor’s and 2 years more of graduate school to get my Masters in Speech Radio/Television, Film.  As Vietnam was really in full swing, even though I was married, I decided enrolled in ROTC (Reserve Officers Training Corp). But ROTC was four years and I had only two years to get my Masters. So the Army, needing bodies for the war, offered a new ROTC plan. I could go to Basic training at Ft Knox KY, home of the armor, to make up for two years of ROTC and finish with two years while getting my Masters.

Basic training was one of the best things that ever happened to me! You learn a lot about yourself and I learned the importance of NCO’s (Non Commissioned Officers). Of course our DI (Drill Instructor) wanted to flunk us all, as “you men’s were going to be officer’s!” I took basic in the summer of 1966 and lived in the old WWII barracks. It was HOT. As I was on the track team at Mizzou, I did very well in the Battalion mile run championship. I set the record at the time for running it boots. So then my DI was a little kinder to me and also liked that I made “Expert” badge with auto rifle bar and with rifle bar. The last week of basic, they got up a pool to have my head shaved, as they knew I was getting married. Nice. So they had the biggest guys take me to the barber shop to get my head shaved, ha, ha. No I couldn’t out-run them as they blocked doors from the barracks.

The summer of ’68, I was subject to a 9-week officers training, living in a tent with a mud floor, outhouse, lister bag water (water kept in canvas bags). It was VERY hot and we had artillery shells flying overhead most of the time. On the last night they had an exercise to get from point A to point B. Well you were never going to get to B. They had set up a POW type camp. They kept us in a footlocker and would bang it with a BB bat and did other fun things throughout the night. The next morning I drove home with a Mizzou buddy. He said as we got closer to Columbia, Bob you don’t look so good. Why you ask, I had crawled through poison ivy in the dark the last night and had poison ivy everywhere!  By the time I got to our apartment, Kathy almost didn’t recognize me as my eyes were like slits. All she remembers is me saying, “blue carpet,” as I had been living on a dirt floor for nine weeks. So a trip to the hospital for cortisone shot was next.

There was also training at Ft Gordon, GA Signal School and Ft Monmouth, NJ in 1968.
In June of 1968 I completed my Masters and was commissioned as a 2nd LT Signal Corps. It was a six-year commitment; two years active duty, two years active reserve, and two years inactive reserve. I was considered kind of a “maverick” (enlisted who becomes officer) as many ROTC people had not been to basic training.  My first orders were to go to New York and work at the Army Pictorial Center in Long Island City. So Kathy and I drove our Chevy Impala to New York. We really enjoyed being there and the USO had last minute tickets to Broadway plays. But in the background I knew that Nam orders were coming. Due to the draft, New York had many draftees in New York and very few officers. So that meant NOK (notification of next of kin). So we would be subject to a 24 hr on-call notice to carry out this task with as much dignity as possible. In those days they sent a driver and you went by yourself!  As soon as you knocked on the door, they knew why you were there!

So as expected Nam orders came. You got a 30-day leave we before shipping out to Nam. So my wife & I decided to go to Europe, why not. We went to Mc Quire AFB in NJ and waited for “space available” to Europe. After a few days we got seats on a Pennsylvania Air National Guard Constellation (48 vintage). Maybe about twenty of us on board and of course you sit backwards on military planes. Had to land in the Azores, to overnight and re fuel for England. We flew into Mildenhall AFB and took the train to London. We also did France were American’s were not popular. Wait a minute we are picking up your mess in Nam and you don’t like us! Road signs had US equals SS! Flew back from Germany to New York and packed up. We drove straight though to St Louis.  I left via Ft Lewis in Washington State. I sat next to an Airborne Ranger (lerp) who was going back for his second tour, who the whole trip keep saying, “young Lt better eat all your ice cream as you may not get any in Nam”!

Our unit was also considered a combat photo unit. Sadly due to the fact that the camera guys are looking through a view-finder, they often were exposed to injures or death. It was the same in most other wars. Sadly the month after I left we lost five of our company when a Huey was shot down in Cambodia. We lost others, but this was the most lives lost in a day for our company. Our company earned the Republic of Vietnam Gallantry Cross w/Palm Unit Citation and Army Meritorious unit citation (I was awarded the usual Vietnam campaign medals with two bronze service stars). We had locations throughout Vietnam. One of my jobs was as a pay officer. So I would carry a bag that said I have a lot of money and a 45 pistol, to quote protect the money and me. Was promoted to 1st LT in country.

Perimeter defense duties, especially at night, was one of my duties. The quote was, “we owned the day, they owned the night”. They would use bamboo polls tied together to get satchel charges around our bases. We were subject to “in coming” but this activity was more specific, mainly targeting med-a-vac hospitals. One night as officer of the day, the MP and I patrolled the perimeter at night. We approached this one pill box, and when we got out of the jeep and walked in, the army guys were all stoned!  We captured all of their weapons and charged them. I was getting “short”, not much time in Nam.  I was more concerned about being fragged (a grenade gets somehow tossed at you) by one of these guys, than incoming!

There was a chance meeting in Vietnam with my college roommate Kim Krueger (FO). He and I ran into each other in Long Binh just by chance.  The country looks small on the map, but it is a big place.  Neither of us knew the other was in Vietnam.  We have a photo of the two of us when we met and that Kim found. I was going to nominate Kim for the Missouri ROTC Hall of Fame, but he nominated me. We were able to be there together for the induction at Mizzou.

After my nine-month tour in Vietnam, I returned to St Louis and had the two years active reserve and two years inactive reserve. I was hired by KMOX-TV then owned by CBS. I did not have to attend reserve meetings, but was called up for two weeks for reserve camp at Ft Mc Coy, Michigan. So I took my wife, Kathy, and drove to the Camp Mc Coy. I reported to the 1st Sergeant (they really run things), and waited for him to salute me, many LT’s saluted them first! He said why are you here young LT?  I said I got orders “Top.”  He said it looks like you have done some time. I said Nam 69/70 and of course he wanted to know where. He said well what do you want to do young LT?  I said I have my wife at a motel and want to set up a perimeter defense. He almost smiled.

I was honorability discharged in 1974.

Helping with Veteran activities is still very important to me. I was honored to be named the “Veteran of the Year” by the Missouri Athletic Club in 2014. Others include: USO of Missouri (20+ yrs), Co Founder of the Veterans Business Resource Center, Salvation Army Veterans Residence Center, Gateway Warriors, Vietnam Veteran’s Roundtable, Veterans Consortium, Company Of Sergeant’s Stand Down Project, and co-chaired our 221st Signal reunion in 2012.

As I say, “many have done more and some gave ALL”!

Speaking with the students at Clayton High School has been a good experience. We and other RVN veterans are able to give first hand knowledge about the war.

Explaining the differences of what the media says about the war and what actually happened are two different stories. That famous photo of the young girl running with napam was NOT done by Americans. Yet we are blamed for it!

General VoNguyen Giap (one of the top leaders for the North) said in his memoirs about the battle of TET, “You defeated us! We knew it and thought you knew it. But we were elated to notice your media was helping us (VC)!”

These are just two examples of the biased coverage about the war.

Other poorly covered issues by the media are the following:

There were 2.5 or 2.8 million of us who served in Vietnam and sadly 58,000+ lives were lost. The numbers indicate that two thirds of those who served in Vietnam were volunteers, not draftees.  And the numbers (real people) represented the same percentages of the population, not as the media tries to make look as only one segment. Of those killed in Vietnam, 86% were Caucasians, 12.5% African American, and 1.2% other races.

These are some of the “facts” about the RVN war that are never reported.  And yet we are looked as having lost the war. Why? - Because of the media’s coverage of the war. It will be interesting to see if ANY of this kind of information is part of the up-coming series?